Bone conduction- a technology that extends from Beethoven to Dreem. Ludwig van Beethoven might not have had a smartphone, back in the 18th Century, but did you know the famous (and famously deaf) composer utilized the same technology that we use to help you get some good shut-eye? We’ll give you a clue: it’s based on how we perceive sound. Its name: bone conduction!

Bone conduction… did I hear that right?

Before we get into ‘ole Ludwig, let us explain how our bodies interpret sound. When you speak, your vocal cords vibrate, sending a frequency of sound throughout your body. Think of this wavelength as similar to the ripple a pebble creates in an undisturbed lake. Similarly, vocalized sounds create vibrations that travel through the air so that others can hear you. 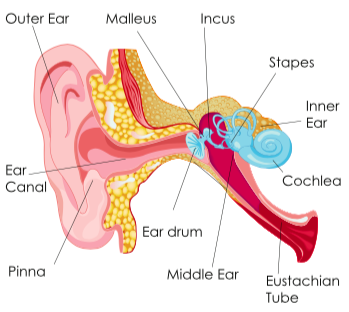 From there, our ears take in sound through thin membranes — similar to drumheads — that vibrate and transfer to the tiny bones behind the middle ear, which travels further into the inner ear, or the cochlea. The cochlea translates the “ripple” signal into an electronic one sent to your brain. And that’s how you hear!

But there is another path. (We’ll call it the one less traveled.) Think about the internal sensation you feel when you hum with your ears plugged. That sensation is the sound passing directly through your bone structure to the cochlea and is a process known as bone conduction. (And that path makes all the difference.)

So what do Dreem and Beethoven have in common? Since Beethoven couldn’t hear, he utilized bone conduction (and his brilliant memory) when he composed his music. He attached a rod to his piano and bit down on it, holding the rod between his teeth. As he played music, he could feel the vibrations in his jawbone and perceive sounds. That’s how a deaf man could compose this.

Beethoven’s nifty invention has been improved upon by modern technology. And you can find it in Dreem! The device has a tiny piece of metal that transmits sound directly into your skull, allowing you to listen to relaxation exercises and your morning alarm without having to deal with headphones all night long (or worry about waking up the person sleeping next to you! )

So next time you go to sleep with your Dreem 2 headband — thank Beethoven as well.