Hugo Mercier, co-founder of Dreem, was at TEDx Paris to announce the launch of the Dreem Adventurers Program. At Dreem, sleep is a big deal, we’re constantly developing new ways to help people improve their sleep and consequently their overall health and quality of life.
Here’s the text of his talk on the absolute importance of sleep in full.

Sleep deprivation has become a sign of productivity and personal accomplishment.  Hugo Mercier

The man in this picture is Sarvshreshth Gupta. He is 22 years old. He works as an analyst for Goldman Sachs, an investment bank in San Francisco. On April 16, 2015, he called his parents in India in distress, to tell them, “It’s too much, I have not slept in two days. I have a meeting for a major client tomorrow, I need to finish my presentation, my VP is angry, and I will have to work all night alone at the office.”

That same night at 4am, he was found dead in the parking lot next to his building, where he jumped. 48 hours without sleep, stress, and pressure lead to his suicide. How did we get here? How did we reach the point where we’re sacrificing our sleep?
Well, for the past several decades, we have been sacrificing it. Just as cigarettes were a symbol of virility and success in the early 1990s, sleep deprivation has become a sign of productivity and personal accomplishment. As Gordon Gekko said, “Money never sleeps”.

Everything changed when Thomas Edison, who considered sleep was a waste of time, invented the light bulb. Our nights are electrified. Our societies are industrialized and digitized. Global businesses run 24/7. This would suggest that those who sleep less have a strong competitive advantage.

As  Donald Trump says, he’s very proud to sleep four hours a night. By the way, sleeping four hours a night never helped with making the right decisions. Anyways, today nothing has been published to prove him right. In fact, almost 0% of the population can sleep less than five hours each night.

Yes, sorry. For the average person, the scientific community has proven that sleep deprivation — which is characteristic of more than one in three people present in this room — has devastating consequences on health and performance.

The epidemic of poor sleep is the critical issue of this decade.  Hugo Mercier

In the short term, it impacts physical and cognitive performances, and in the long term, it impacts the entirety of your health. Lack of sleep is correlated with diabetes, with hypertension, with diabetes, with mental disorders and Alzheimer’s.
Sleep is not a luxury, but an absolute necessity. When we sleep, several critical biological and physiological mechanisms take place in our body. Our muscles and our body recover, we consolidate our memory, our cells regenerate, and the brain’s waste is eliminated. For example, the amyloid beta — the amyloid beta causes Alzheimer’s, is secreted all day and is eliminated while we sleep.

Yes, in 70 years, we have lost 60 days of sleep. A shocking fact: in 1950, the average teenager would get 9 hours of sleep, to develop fully and to thrive. Well today, more than 70% of teenagers sleep five hours a night.

Unfortunately for us, current solutions that serve to aid us in our sleep behavior are few and not very convincing. The most well-known, sleeping pills — France holding the record for using them — do not help, under any circumstance, to sleep better. Second, they have disastrous effects on our health.
The epidemic of poor sleep is the critical issue of this decade. To such an extent that an unprecedented effort has been made into sleep research.

A few weeks ago, the Nobel Prize for Medicine was awarded to a team of three scientists who discovered the mechanisms behind our biological clock. Our biological clock is what makes us want to sleep at night and wake up in the morning. To award, the greatest scientific award for work on sleep is the most prominent proof that sleep is now more than ever a major subject in society.

What struck me is how many solutions, concepts, principles, innovations, and ideas exist to help us sleep better in a non-invasive way. So why do we sleep so badly, even today? The problem is, to understand and reach our sleep issues, we must understand and react to our brains, of which is extremely complex, expensive and restrictive today.

For example, if you have sleep issued, you go into a sleep clinic. There, you’ll be equipped with measuring equipment which is called a polysomnography and costs around 20,000 euro. Technical and medical staff take one hour to set it up, the analysis in the morning take two hours, and the night at the hospital will cost 1,000 euro.
But what you see here is one of our users wearing our technology. The headband replaces the clinical device 90% of the time. It takes 10 seconds to be set up. The analysis is completed automatically in the morning, in one minute, and the night’s stay was free since you slept in your own bed. 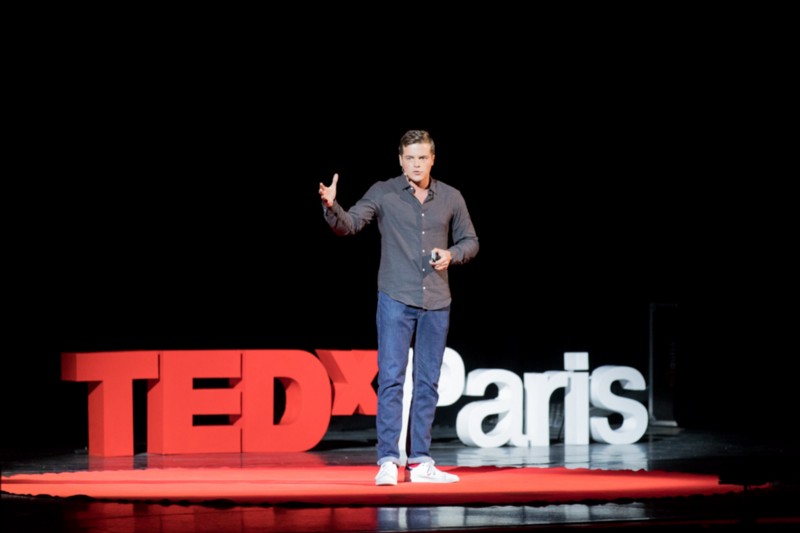 When we looked at these numbers, we came up with an idea. Why not create the first dematerialized sleep lab? Well, I am very happy to announce at TEDx Paris tonight, that registration opens tomorrow for the launch of an unprecedented research program.

Users of our product will be able to voluntarily participate in a research program. They’ll be the first to receive new ideas, new concepts, new features (noninvasive of course), to help them sleep better. On their side, they’ll provide us with more sleep data, and more information about how they feel,
For example, during the day we will be able to analyze anonymous data from thousands of daily recordings. We believe that 90% of sleep issues can be solved with noninvasive techniques. In order to do that, we need to conceive these techniques, we need to develop them, to implement them, to text them, to iterate them. And that’s impossible with traditional research.

Through this program, we have the ambition of developing and testing new features — noninvasive ones — to help us improve the quality of our sleep at an unprecedented geographic and temporal scale.

Our first program will last for one month, with 1,000 participants. It will start in January and will product 20,000 nights. As a comparison, a traditional clinical trial in the field of sleep costs around 50,000 euro, lasts six months with 25 participants and 75 nights.

Our process will be six times faster, will create 300 times more data and costs us 10 times less.   Hugo Mercier

In the long run, the goal of this program is to help us develop non-invasive features to sleep well again. So that we have an alternative to sleeping pills. But it doesn’t end here. With all the sleep data we’ll receive, this data will be on inestimable value.

We’ll have access, every night, to 7–9 hours of high-quality physiological recording. Brain activity, heart rate, breathing rate. And we think that we will be able to detect markers that will allow us to predict months or years before symptoms show up. Symptoms of certain diseases.

We are obviously thinking of neurodegenerative diseases, cardiovascular diseases, mental diseases since they are correlated with poor sleep. If they are linked together, an accurate measure of sleep can help us detect these conditions.
Transhumanists want to transform our bodies with advanced technology to enhance physical and cognitive performances. That’s true — it’s sexy, it’s appealing, it’s interesting. Yes, we should realize that this way of thinking has driven us to sacrifice our sleep in previous years.

Our quest for performance and productivity will have certain consequences on our health. We are more anxious, more nervous. We are seeing more cases on neurodegenerative and mental illnesses. This must stop. We must act — scientists, doctors, engineers, schools, companies, and of course sleepers.

Fighting the global sleep epidemic is an absolute priority. We all have to slow down, and it starts tonight.   Hugo Mercier

Dreem announces the winners of our first Call for Proposals

This week, Dreem announced the winners of our first Call for Proposals at the World Sleep Congress in…

It’s official! It’s easy to throw words around in order to stand out from all the rest. This…

Today we're excited to share the results of the latest clinical trial made with Hôtel Dieu and Dreem. …