As Covid-19 spread and countries went one by one into some form of lockdown, daily life changed significantly for the vast majority of the population. Schools closed, parks were gated up, shutters were pulled down on business, work situations changed and access to the outside world became limited.

How is sleep affected when daily routines grind to a halt?

As people adapted to this new lifestyle, pre-lockdown routines became obsolete, and our daily rhythms- wake-up times, work-out times, mealtimes, screen-times- suddenly felt out of sync with this new reality.  Not to mention the added stress and uncertainty that accompanies living through a pandemic.

All these daytime disruptions inevitably had an impact on people’s  nights. In order to better understand to what extent, Dreem’s analytics team teamed up with Grenoble’s University Hospital (CHU Grenoble) to undertake a unique study of sleep during lockdown, that combined respondents’ perception of their sleep, their mood and current living situation with objective, precise night data collected using the Dreem headband.

With the rules and timelines for lockdown varying so much from region to region, the team decided to focus their efforts on one country, France, where the move into lockdown was clearly defined and relatively strict, making its impact easier to measure.

On the evening of March 16th, President Emmanuel Macron addressed the nation announcing a strict lockdown beginning the following day in attempt to slow down the virus’ spread. Access to the outside world was limited to 1km (0.62 miles)  around the home for essentials such as medical care, groceries and so on. 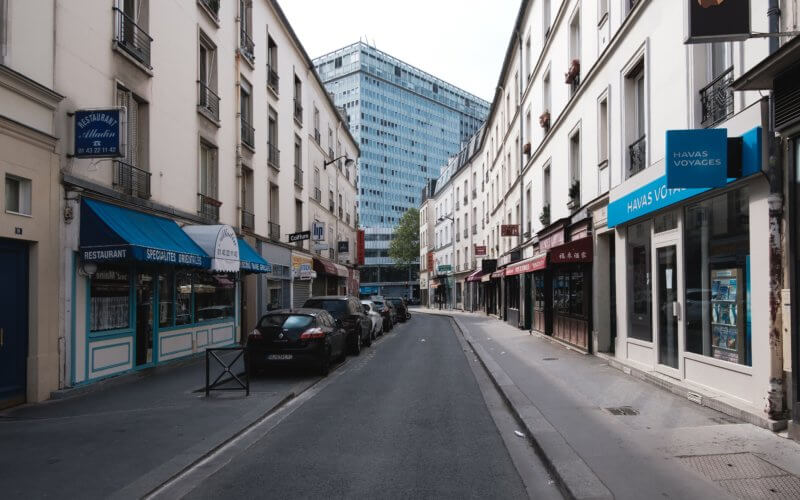 A questionnaire was sent out by the team to the Dreem user-base looking for volunteers to take part in the study and detail their current living situation, their feelings, anxiety levels (using the HADS-A scoring) and Insomnia Severity Index (ISI): 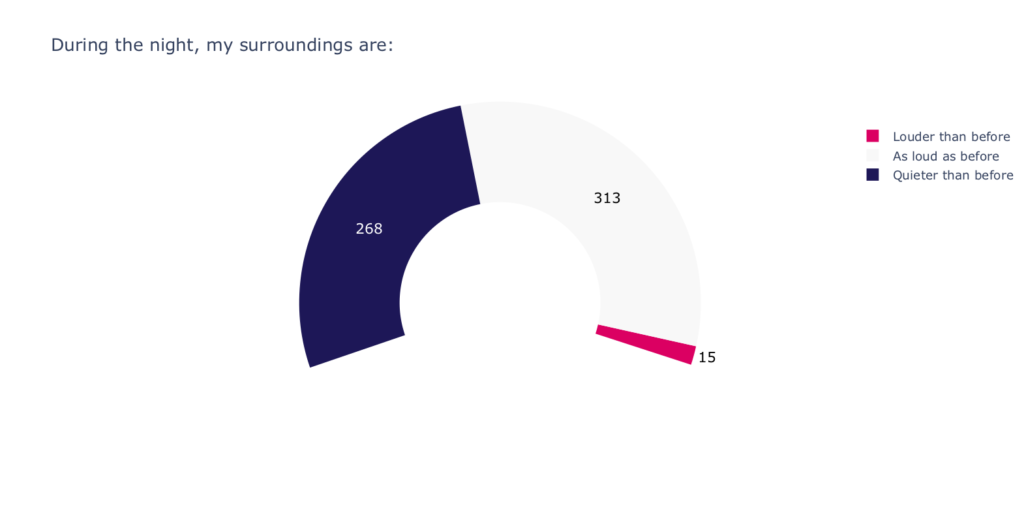 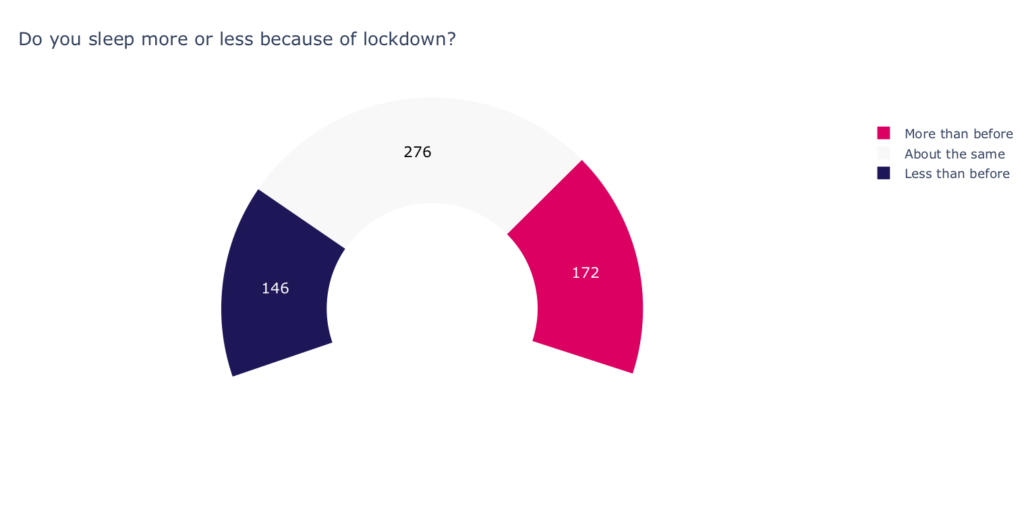 From over 1500 responses,  the team finished with 600 respondents eligible for the study, all of whom had at least 5 nights recorded with the Dreem headband pre-lockdown, were in the right time-zone etc.

Perhaps the most marked shift was in how both bedtimes and wake times were later for all types of sleepers: 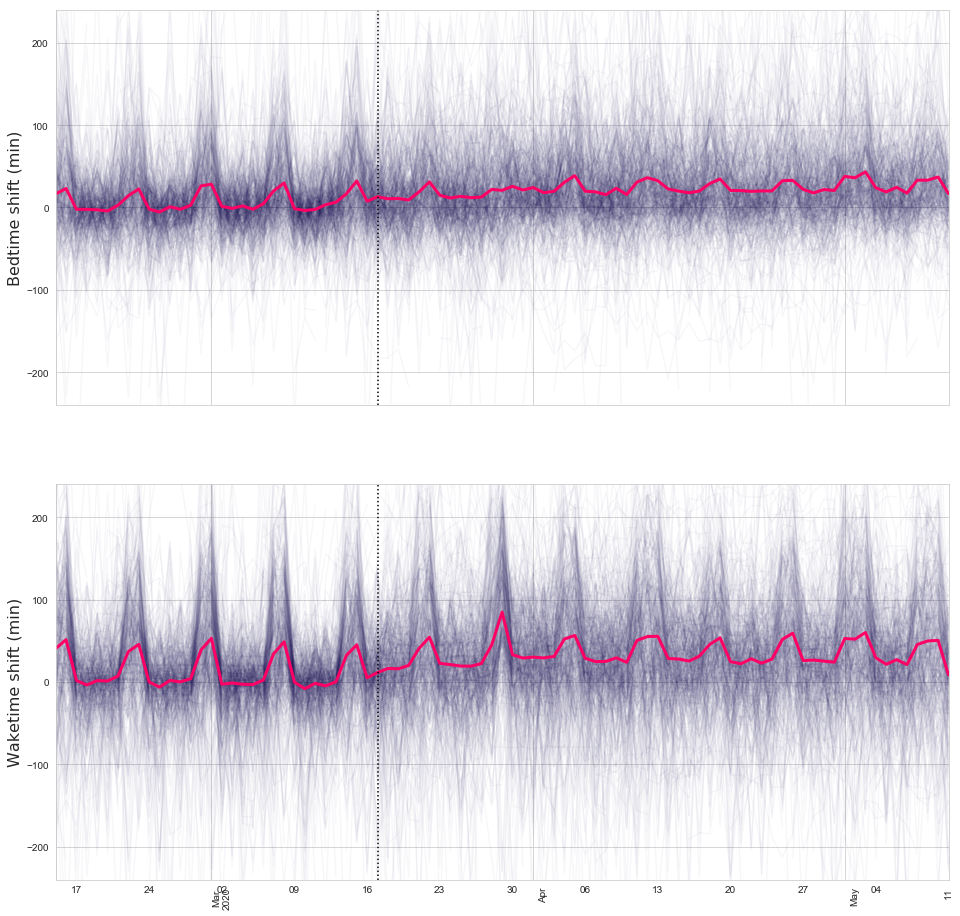 Bedtimes shifted by around 20 minutes on average: 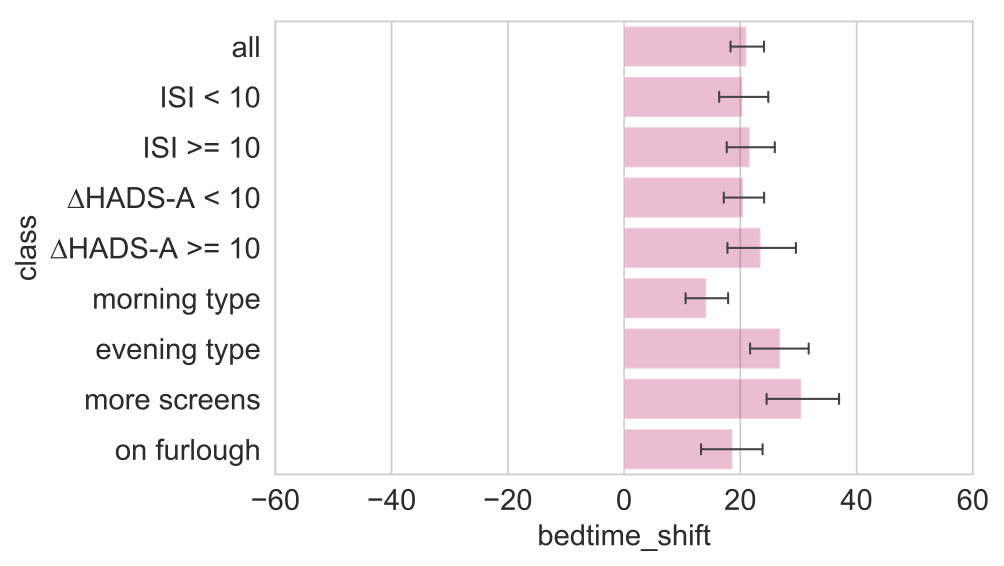 People were waking up around 30 minutes later  on average: 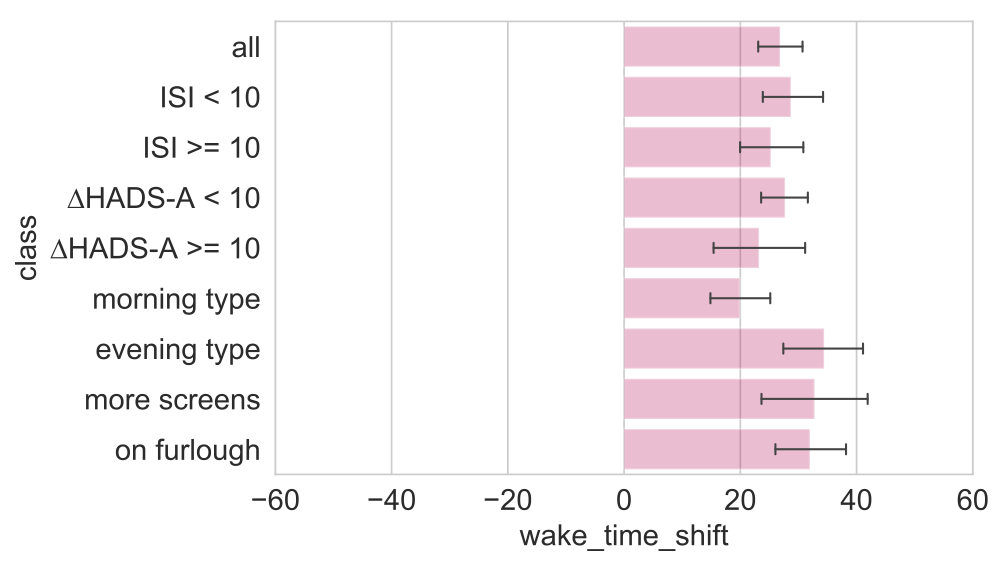 In some respects, this is a logical result of confinement, especially as some people were working reduced hours or not having to commute. However, it is perhaps interesting to consider these figures in the context of chronotypes.

Chronotypes are behavioral manifestations of a person’s circadian rhythm. Simply put- there are morning people who are up out of bed and productive in the morning and evening people who find mornings tough, but are often energetic toward the end of the day. What makes confinement so interesting is that it enabled the team to study chronotypes “in the wild” without the constraints that the 9-to-5 work day, and arguably the culture around it, impose.

We can see that for evening people, their bedtimes and wake-times were among the most significant shifts, while morning people (who are probably the best adapted to the traditional 9-to-5 work day) showed little deviation from their pre-confinement routine.  What’s more, as we’ll see below this shift in routine also had an impact on the fabric of  sleep itself.

The team saw an increase in sleep duration, particularly for respondents on furlough, evening types and those with an ISI score of less than 10 (no insomnia at all to mild insomnia): 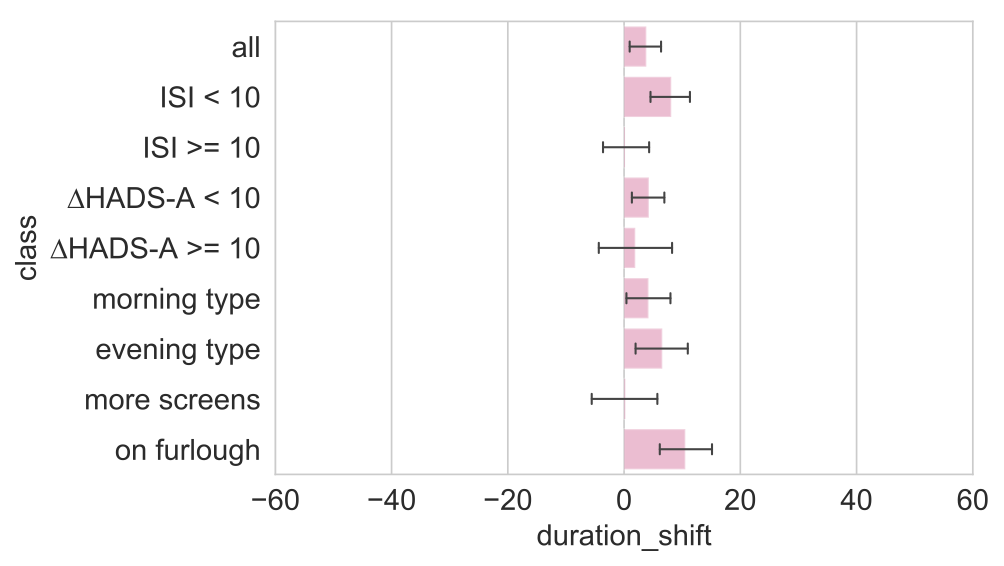 When we break the nights down into sleep stages, we can see a slight increase in N2 (light sleep): 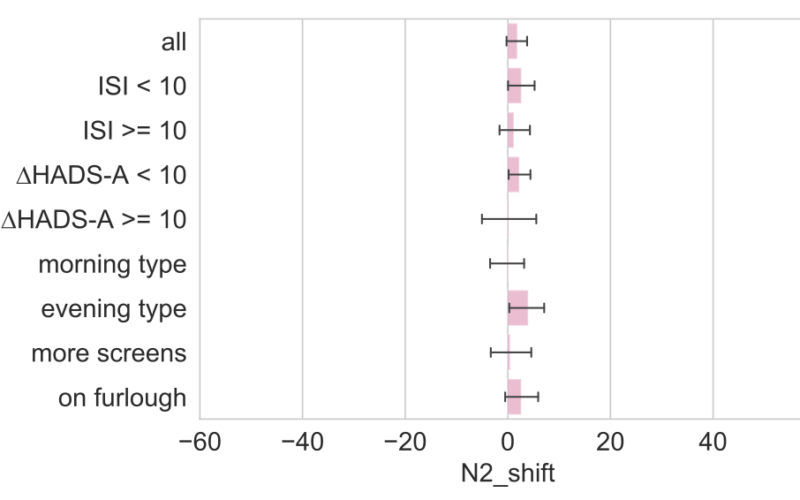 A slight decrease in N3 (slow-wave sleep) which can be explained by the shift towards later bedtimes, as N3 sleep normally happens at the beginning of the night. What’s more, the longer average sleep duration is important here too. N3 is the sleep stage where you deal with physical fatigue and exhaustion, longer sleep duration means that you’re less fatigued and have less sleep debt, and so less need for N3 sleep. 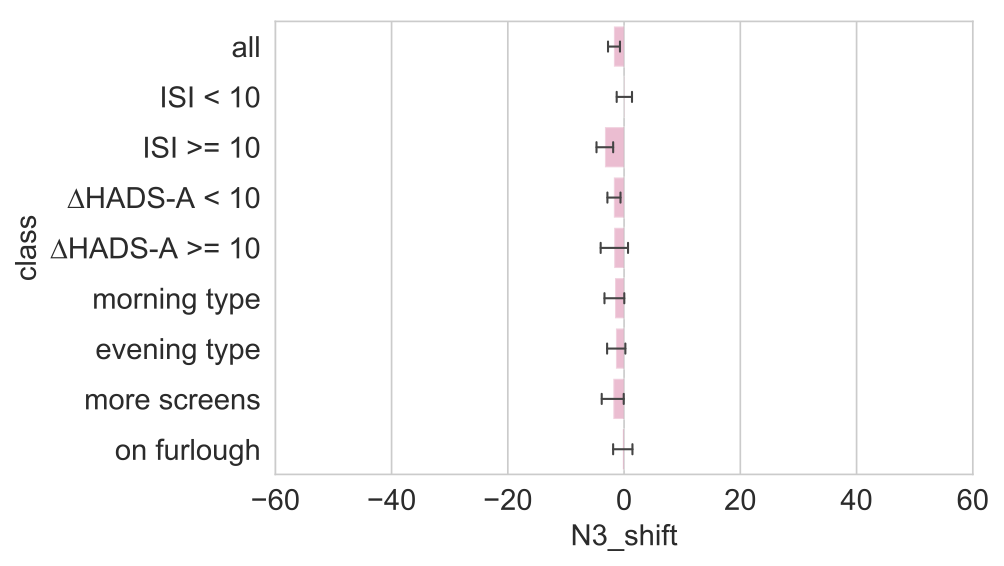 And perhaps the most exciting shift, an increase in REM sleep: 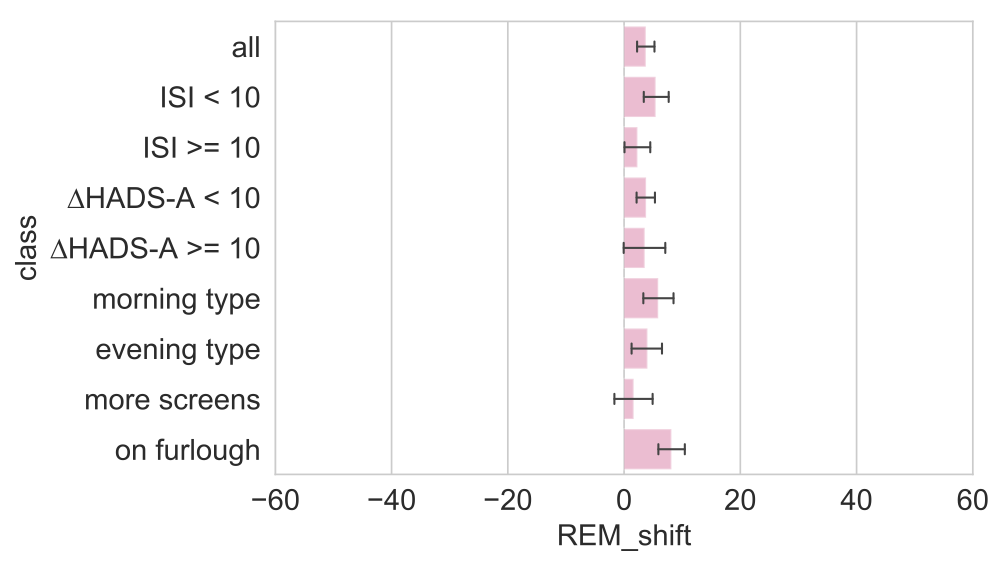 There have been several articles recently talking about the rise in intense dreams during the pandemic and this can be explained by this increase in REM sleep, the sleep stage which is accompanied by a propensity to dream more vividly. This shift can be explained by the later bed and wake times, as REM sleep tends to happen later in the night as well as the decrease in sleep pressure that comes with longer nights.

Confinement changed the shape of our days which, as these results show, changed the shape of our nights, the very structure of sleep itself and even how vivid our dreams are. At Dreem we are passionate about studies like this, that combine objective and subjective data to create a unique viewpoint. We are committed to deepening and sharing knowledge about sleep, daily life and the connection between the two. And none of this would have been possible without the participation of each user who responded to our questionnaire and volunteered for this study. To them we say thank you.

Working at Dreem is pretty great, rarely a day goes by where you don't learn something new. So…

Sleeping together: Positions and more

Sleeping together: positions, dreams and snoring... we take a deep dive into how sharing a bed impacts your…